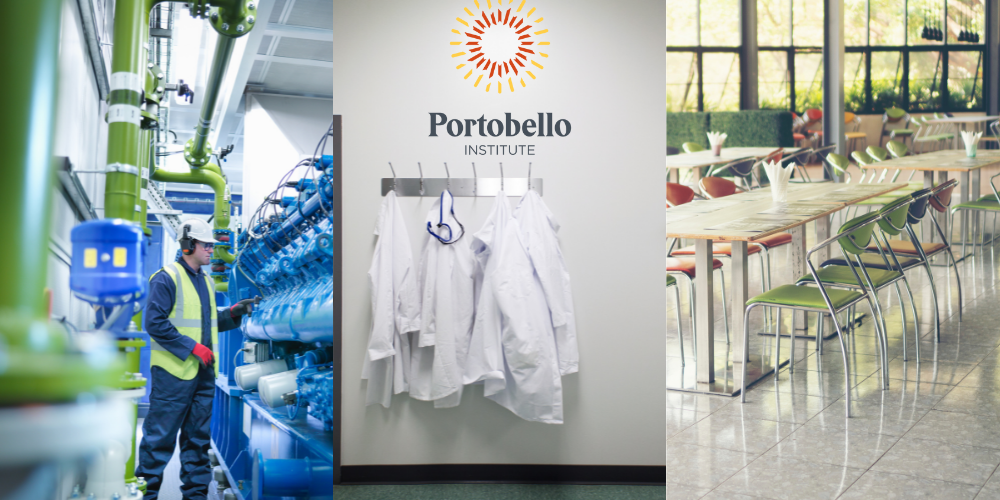 Originally from Churchtown in South Dublin, Liam Fletcher has been living in the southeast of the country for over 25 years. Liam is the Head of Facilities Management for one of the largest pharmaceutical companies in Ireland. He heads up an operation that includes over 700 employees, three large buildings and around 500,000 sq. feet of land.

Starting off at the company as a validation engineer, Liam quickly moved on to be a project engineer before he assumed the role he is in today, as Head of Facilities.

Liam studied building service engineering in Bolton St, in his native Dublin. He says that degree laid the groundwork for the job he finds himself in now.

“My primary degree is from Bolton St as a building service engineer. That would cover 90% of what you do in facilities. The full range of heating, cooling, and lighting.

Adjusting to the management of soft services isn’t the only thing that Liam had had to adapt to. Globalisation has brought with it its share of challenges.

“Primarily with the company, when we started off, we were part of a larger corporation. Each site was fairly independent.

“They don’t get involved in day-to-day activities on-site, but there is an expectation that we all try to do it in the same fashion, to a degree, and that we try to learn best practices from the other sites, and we try to share our best practices and good experiences, or lessons learned.

“We’re given global standards to follow, and then there’s a caveat that you have to follow your own local legislation, which is different from the global standard. The most important thing is to adapt.

Despite the attempt at global standardisation by the company, there is no such thing as a standard day, according to Liam.

“My day is incredibly varied is the very short answer. At the start of the week, I could have a discussion about the budget, the budget could be €5 million for next year, or €100,000 for this and €50,000 for that. Then the next meeting you go to, you’re talking about the flying ants in the office, and what are we going to do about it. It’s a huge swing from what you think is very important. But it’s all very important. If someone has ants flying around their office or crawling over their sandwich, they’re a lot more likely to get upset about that than they are about the five-year annual budget forecast not being done yet.

“Within my role, I do facilities and building projects. On the building projects side, we do the capital expenditure. If there’s a new room to build, a new packing hall, an extension onto the canteen or labs, we’re involved in that. There’s always a planning phase on that before we hand it over to the architects, builders, and consultants. We advise on the capital spend. Is it getting what we asked for on time?

“On the facilities side, we look after hard and soft services. The hard services, although there are a lot of them, it’s easier to manage. When you’re talking to a boiler, a freezer, or a chiller, they don’t tend to answer back. They either work or they don’t work, and you get on with fixing them and you schedule the maintenance.

“On the soft services, there’s everything from garments, to toilets, to canteens, cleaning, pest control, security, all that rolls into it. The cladding on one of the buildings was letting in water. We had to get a company in to fix that. There’s a boom lift outside the factory and the lads are out fixing that. I’m not involved in issuing the permit for that, but I am involved in coordinating the activity,” he said.

One of the biggest parts of Liam’s job is ensuring the site run as smoothly and efficiently as possible. Part of this is making sure that money is being spent in the right way, with minimal waste.

“As it turned out, we could bring in the white cotton coats at 30 cents a week, versus the paper coats, that we use and dispose of, which were costing €2.65. By cycling through more cotton coats than paper coats, we were ending up saving money, and it paid for additional coats to go into the system and also make a bit of a profit.

“People don’t like throwing things away. They don’t like opening up a new white coat, wearing it for ten minutes, and then throwing it in the bin. They’re much happier to recycle the stuff.

“It’s all about getting a balance. You can never get perfect, but we see what’s achievable and what we can do within the resources we have. The amount of time and money they can give us to do it,” he said.

One thing that Liam values is the willingness to try and to take (calculated) risks in order to achieve their goals. A lesson he learned from a podcast.

“I watched a podcast recently on training. The exercise was they gave you a marshmallow, a bunch of spaghetti, and some playing cards. You had to build a tower as tall as you could and put the marshmallow on top.

“They compared the different types of groups. A group of high achievers tended to spend the first ten minutes fighting it out over who would lead the group.

“The best ones, they found, were the young children. They had no fear of failure. They had to build towers and that’s what they did. The first couple fell down, but they kept trying. There were multiple iterations. There was no fear of failure. They didn’t care who was in charge. They all had a go and learned from each other. They kept the wheels turning and didn’t care who was pressing the button,” he said.

An increasingly important factor for Liam in his day-to-day operations is sustainability, as is the case across the FM industry. Liam says that the push is coming right from the top all the way down to the bottom of the company.

“There is a big push for it now. ESG and all that.

‘We’re getting more requests from our global people as well to be more sustainable. We have to feed our metrics back to them. The company is publicly quoted. They report on the New York Stock Exchange. Their environment and social governance responsibility is all part of that.

“A first for us, the company took out a sustainable loan. I don’t know the exact interest rate. It was a preferential rate as long as they achieved savings and carbon output and energy reduction. If they don’t achieve that by the end of the term, the interest rate goes up.

“Globally, on-site, we have a green steps process. For me, sustainability is not just saving the planet and reducing microplastics in the ocean. It has to have a real-life benefit.

“With the coats, I was reducing waste getting rid of the paper ones. I was getting rid of the plastics that were contained in the coats. I was introducing a fully recyclable, reusable cotton coat that was going to last 5-7 years. It was sustainable for me because I was saving the company money by doing that.

“It has to make sense as well. There’s a lot of incentives to it. And again, it’s a balancing act with everything else. We don’t use peat anyway, or turf,” he said.

Liam enjoys problem-solving and says that the most enjoyable aspect of the job is getting the jobe done.

"I get satisfaction from achieving our goals. There are multiple activities and there’s lots of work. I probably need another two days after the week is over to catch up on everything. You can never do everything in the time that’s allowed. You have to prioritise and schedule work in a sufficient fashion so that my internal customer understands when they’re going to get their product.

"You break down the 50 million things you have to do into achievable tasks. Our brain likes completing tasks. You get a release of endorphins when you do. I like getting the job done. It's what I'm passionate about," he said.

For anyone who is starting their career in FM, or is thinking about it, Liam has one very important word to remember.

“Adaptability is the most important word. The breadth of what they’ll be asked is big. You have very specific tasks that are repeatable. But facilities management doesn’t have standard tasks. We have tasks that our one step on the way up the mountain. There is a huge variety. Adaptability and curiosity are key.”

If you are interested in any of our Facilities Management degrees or qualifications you can book a consultation call with our expert FM advisor Brandon McLean here, email brandon.mclean@portobelloinstitute.com or call 01 892 0035.

Pros and Cons of Reactive Maintenance in Facilities Management