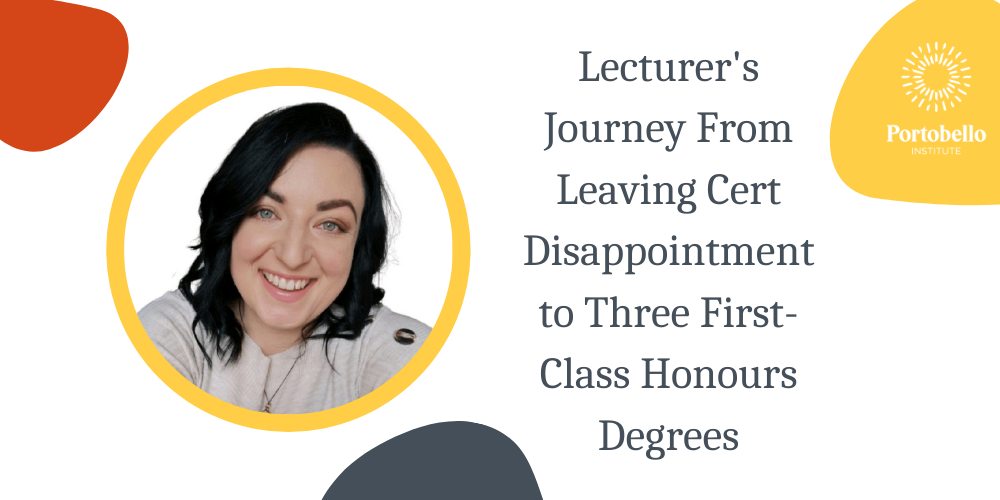 Life circumstances were not conducive to Portobello Institute Lecturer, Samantha Cooney, achieving her full potential when she sat her Leaving Certificate exams over ten years ago.

Having missed over 60 percent of school days in both 5th and 6th year, she spent the entire Summer after her exams thinking she had failed and not knowing what career path lay ahead of her.

However, when the results came out, she had passed all her subjects, coming out with 220 points but completely lacking in confidence in her academic abilities after receiving no CAO offers for her possible choices of journalism or secondary school teaching.

Samantha is an SNA Lecturer at Portobello Institute. She recently received First-Class Honours in her Professional Master of Education.

How did she get from 220 points to here?

Two years after her Leaving Cert, when she was 19 years old, Samantha restarted her education journey with a series of FETAC (now QQI) courses in computer studies and childcare.

These further education courses gave her a new lease of life to regain the academic ambition she once had.

“It is an amazing middle ground for a lot of different reasons. For me, I was an academic child, it was purely my circumstances at the time of the Leaving Cert that prohibited me from attending school and fully participating when I was there. What it gave me was not only a pathway, but a period of time where I could rebuild my confidence and my identity as a learner.

“For some people it was a middle ground for them in terms of the way education is delivered, learning a bit about an area before you commit to a degree which looking back now as an adult in my thirties, I can’t believe we ask 18-year-olds to do that.

“I did two years at the Cork College of Commerce. I absolutely loved it, got amazing support from the tutors, the college and the system of a mixture of exams and continuous assessment, practical work experience, it really was great.

“I had no intention while I was doing it of going any further, I was going to work in childcare in the early years sector and I was very happy with that.

“It was a tutor in that course who gave all of us the perspective that you can go further, there are more options available to you, you can use these courses as a means to enter those courses if you don’t meet the conventional entry requirements through CAO points,” she said.

Feeling inspired and with her confidence rebuilt, Samantha applied to two higher education institutions and was offered both.

She went on to flourish, achieving multiple impressive accolades for her academic achievements and involvement with clubs and societies.

“It was a bit of a dream come true moment when I got that offer. I started a three-year Honours Level 8 Bachelor of Arts degree in Early Years and Childhood Studies at UCC.

“The course, over the three years, was split between applied psychology, social studies and education and I absolutely loved it. Of course, it was challenging and difficult and there were lots of new things to learn but I absolutely adored it.

“I had such a leg up from doing the QQI courses. There was a foundation level of knowledge there already that people who came straight from the Leaving Cert just didn’t have regarding the content, and even how to study at a higher level, how to write an assignment and how to do your own research.

“It’s always a shock when people go on from the Leaving Cert and are required to be skillful in their own studies, no one is teaching you how to do that, but I learned that from my QQI courses, so I hit the ground running in first year, that was one of the best parts of that experience.

“Being able to hit the ground running having confidence, having that assignment knowledge, knowing my interest areas already and because I had spent two years with QQI courses getting back my identity as someone who really loved to learn and was academic, I absolutely flourished on a personal level.

“I went from being someone who was so shy and fairly awkward to being involved in so many societies and different groups related to what I was studying and I fully emersed myself in student life,” she said.

Samantha graduated with First-Class Honours, she was UCC’s Graduate of the Year in 2015, received the Peel Memorial Award for Academic Excellence as well as multiple College Scholar titles.

She also received the Student Leadership Award, the Best Fresher Award, a Bene Merenti Award from the UCC, and was given an Activist of the Year award from the Union of Students of Ireland, National Best Fresher from the Board of Irish College Societies and the Peter Benson award for Human Rights Activism from Amnesty International.

To say she flourished is an understatement. She excelled in all areas.

Her confidence in her own ability, which had been completely eroded during her teenage years, especially around the Leaving Cert, had now come back and was solidified, stronger than ever.

Firmly understanding her passion for education, Samantha progressed to a Master in Sociology at UCC where she once again achieved First Class Honours and a College Scholar title.

“This was a slight shift in areas but not entirely around issues of educational equality and equal opportunity. The sociology of why someone can’t or doesn’t receive all that they should from education became of massive interest just from my own experience personally, and that was one thread of content throughout my FETAC level 5, 6 and my degree that really interested me and it is still something I am passionate about today.

“I did my Master's degree in sociology and focused my modules on education and culture and from that, I carried out some research in an Irish context, this was new ground going out into primary schools, carrying out research and doing a thesis. It was a step up again into new territory, but I had the confidence, I didn’t have it when I left school, but I did have it when I left QQI,” she said.

Samantha worked as a special needs assistant for some time, as an intervention tutor, and worked in early intervention. While she was happy with the direction of her career, she got the itch for academia again.

Her dance with the memory of the Leaving Cert was not done.

Samantha decided to follow her deep interest in primary school teaching, which of course, in Ireland means meeting the minimum requirements for Higher Level Irish in the Leaving Cert.

“I was having an issue, in order to teach in a national school in Ireland you need to have a very specific qualification which is a Professional Master of Education.

“So, despite having all the other qualifications I still had to go and do something else but alas the Leaving Cert was in the way for the first time.

“Because I had QQI, I had never once encountered an issue getting access to a degree or masters or anything like that, that was such a wonderful gift that it gave me – it gave me access to these things.

“But here I was at 27 years old, and I had to start studying for the Irish Leaving Cert all over again,” she said.

She took a night course in Irish and sat her Leaving Cert exam a year later when she was 28, over ten years after she had first sat it, but in a completely different position.

“That year of preparing for it and taking the exam was hands down the most difficult academic thing I had ever done and still is to this day. This is in large part due to the negative aspects the Leaving Cert can inherently have on a person’s confidence.

“I was up against my mindset. Despite everything I had learned in my courses, my degree and masters, even with academic awards behind me, that was still an exceptionally difficult year. Not in terms of content but in terms of having the ability to do it,” she said.

But once again, Samantha’s commitment and determination shone through, and she not only succeeded in her Irish Leaving Cert but went on to achieve First-Class Honours in her Professional Master of Education too.

Reflecting on her journey every year when the Leaving Cert results are released, Samantha is sharing her story to inspire anyone whose Leaving Cert didn’t go the way they wanted and who may be feeling let down or lost.

“The Leaving Certificate will never be a reliable predictor of anyone’s potential. If it was, then I would not have three First-Class Honours degrees.

“Now I lecture for Portobello, and I work for two other colleges in further education. I have research papers in peer review. I am jump-starting my research career and progressing my teaching career. I hope to do a PhD at some point, that’s always been the end goal.

“That simply would not have been possible without the QQI system. Those two years that gave me the time, the space and the access to everything I was perfectly capable of achieving but my circumstances at the time of my original Leaving Cert just didn’t allow.

“I had a two-year gap between finishing school and starting my Level 5 course, for some people that gap is 10 years, 15 years or 20 and then they are showing up in my SNA class. This is the case for so many different reasons such as having bad experiences at school, personal circumstances that weren’t conducive to learning or the way education was taught at the time of their schooling and so on. There are so many different reasons,” she said.

Samantha brings that empathy and understanding to her classes at Portobello Institute, with a recent student of hers, Danielle Horgan-Coghlan, giving the following feedback:

“We were very lucky with the tutor we had, Samantha was really, really good. For someone like me who was gone from education for years, I did a complete career change, I had small baby at home and two older kids as well.

“Straight away she said, ‘don’t panic’, she was very reassuring, I think she built up everyone's confidence to do it and keep going with it.

"She gave very real-life examples to make it easy, it wasn’t all this language and terminology that you wouldn’t understand.

“Samantha was unbelievable. We always say how lucky we were to have had her as a tutor,” she said. 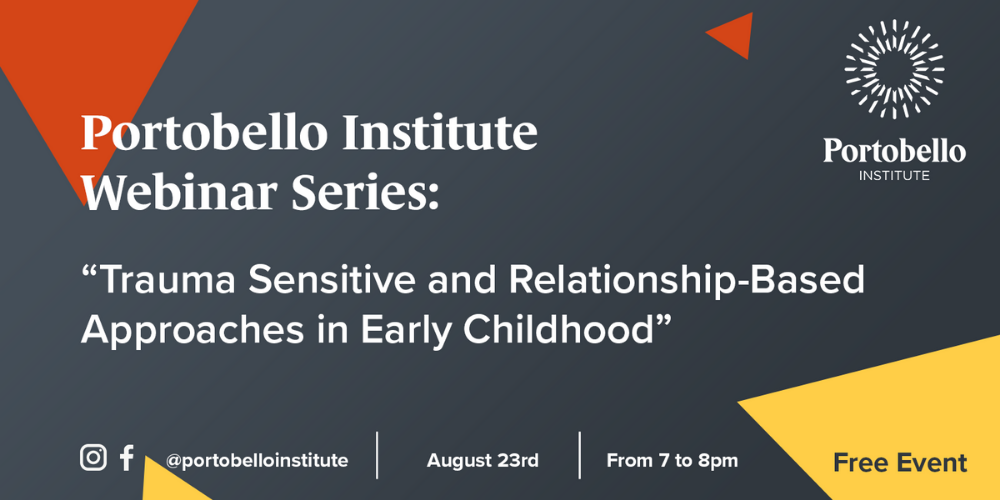